PXE boot is a way to boot computer systems from the network instead of a local disk. PXE allows to use computers without a local disk (diskless operation) at all. 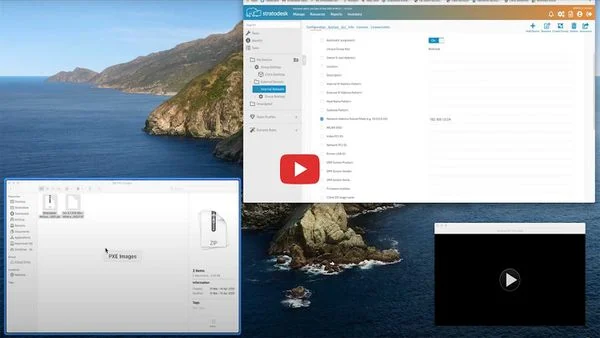 When you have set up Stratodesk Virtual Appliance, you need to log in to its administration interface (port 80 or 443, //YourIPAddress/va-admin not NoTouch Center) and do only two things:

Stratodesk Virtual Appliance supports both live-booting and installing on the harddrive via PXE boot. In fact, by default, a boot menu will be shown for a few seconds exactly as it is done when booting from a prepared USB drive (you can change this, see below):

A machine booted via PXE can either download the whole operating system at boot time (depending on actual, typically between 100 and 400 MB in size) or use a streaming approach to only fetch those portions that are needed. The latter builds on the Linux "network block device" functionality, thus it is called "Network block device".

It is not possible to say what is better. In fact, most people prefer the download method since it makes endpoints independent (if the PXE server goes away, it would not matter for a machine already booted with this method). If you really care about network load at booting, then network block device is for you, even though it generates a dependency on the Virtual Appliance.

In the Virtual Appliance administration console, by clicking on PXE and the "Configuration" menu item below "PXE", you can change the PXE configuration, such as:

Furthermore, you can edit the boot menu, i.e. the textual contents of what the user will be seeing, as well as the actual bootable images and their labels as well as kernel parameters. You might not have to ever edit any kernel parameters (we know that sounds scary), but if you choose to make multiple images available, assign easy-to-read and easy-to-type labels. In fact a valid label would just be the number 1 and the number 2. So you could create a boot menu that lets user choose between 1 and 2.

The section "Detailed image configuration" allows to selectively enable or disable live-boot or install functionality per NoTouch version that is present on the VA. It also allows you to define custom labels that users will have to type in to start a certain. These labels should match the boot menu or else you'll confuse your users!

Please note that this is essentially a system administrator thing. End users will be much more happy with just having one single OS image that's been booted without them even think about it.

The boot menu editor lets you modify the system

PXE boot involves low-level network protocols like DHCP and TFTP that are typically used in LANs only and not over Internet or VPNs. While it is possible to make it running over WAN links, we strongly suggest to use PXE server environments, i.e. instances of the Stratodesk Virtual Appliance or NoTouch OS instances with their builtin PXE service capability in each remote location. When deploying Virtual Appliances to other locations, we advise to deactivate NoTouch Center in the satellite instances as your management will be easier when only one instance is used. To avoid downloading client images over WAN links, to ready-to-go solutions exist:

Depending on which product you use, different procedures may apply. We suggest to consult the documentation of the product you use. Most people will either use the DHCP role on a Windows server, or the Unix/Linux-based ISC DHCPD.

Setting the options on a Windows DHCP server is easy:

We still advise to check the documentation on modifying your Windows DHCP server options. Good starting points are [1] and [2]. Should you run into trouble, check [3]

If you would like to use an existing Linux based DHCPD server you will need to perform the following steps:

This section describes the deep technical steps how the PXE solution is operating. The Stratodesk Virtual Appliances handles all this for you so you do not need to read this, unless you are curious or run into unexpected problems. Technically, this is how a PXE process is running:

's welcome.txt file. Please note the special color coding. Apparently this type of color coding is unique to the PXELinux loader and not used somewhere else. The onscreen help will guide you through that.