NoTouch OS will ask for the appropriate time zone on first boot in the first time wizard, the default being US/Pacific. You can configure this value in NoTouch Center ("Administration" / "Time zone") or locally under the "Time" parameters.

While it may not be necessary to have a very exact time on thin client devices, please make sure it comes at least reasonable close otherwise HTTPS/SSL certificates can not be validated! If you don't care about the time and your systems believe they are back in the year 2012 then most likely your VDI connections will fail simply for that reason.

Note: NoTouch makes sure the date never falls before the build time of the software image used. That is a simple trick ensure the clock is at least in the right "era" and not back in the 1970s, which aids validation of SSL certificates greatly as their are usually valid for a range of several years. However, you should still use NTP. 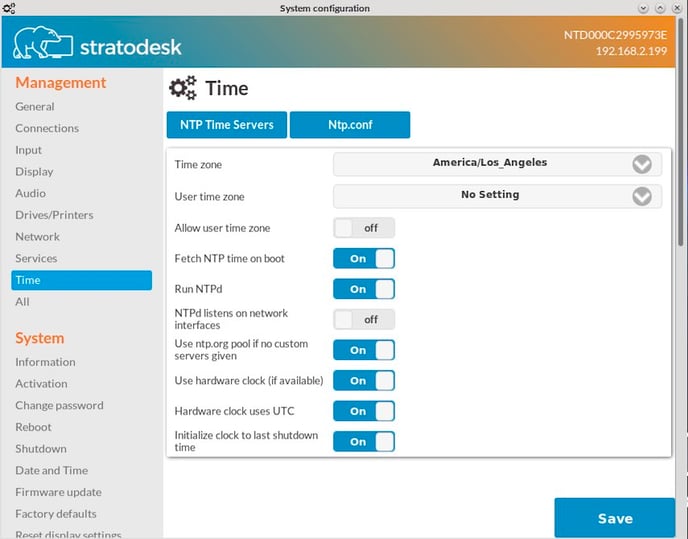 NTP, the Network Time Protocol, allows for automatic time configuration. It will synchronize machine clocks gently and provide for maintaining a proper time at all times (no pun intended). NoTouch NTP behavior is controlled by these parameters under "Time" (in NoTouch Center "Administration"):

One can manually set date and time also. We strongly encourage you to use NTP and have everything being done automatically though.

These are the steps to manually set date and time: 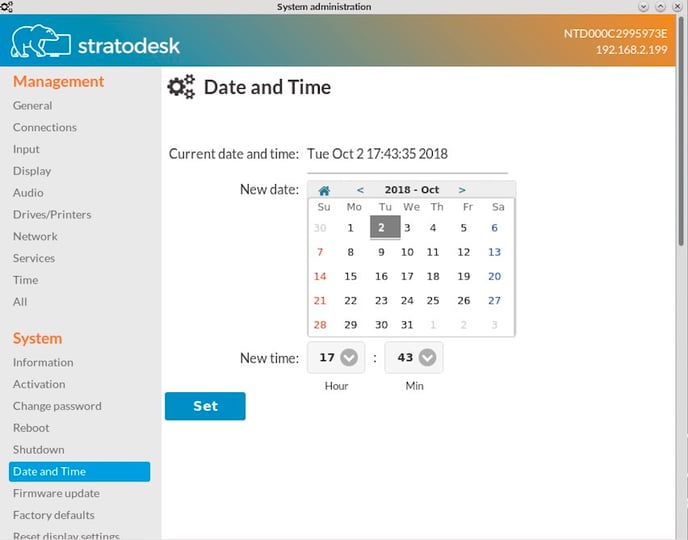 While NoTouch Center can of course set the clients' time zones, it does not maintain a time or time zone setting for itself, as it will simply take the setting of its host system. In case you use Stratodesk Virtual Appliance, you can configure the virtual appliance time zone in the VA's admin console, under VA Configuration.