Stratodesk makes sure NoTouch has latest versions of the Mozilla Firefox web browser integrated, with a PDF viewer and Adobe Flash plugin. People use the Firefox for example to:

Using a browser can compromise your IT security. We want to make you aware of the dangers before you use Firefox - please read the section on #Security considerations.

Depending on your security requirements, organization size and culture and trust in your end users we may even advise you to not use Firefox at all!

As a side note, if you don't like Firefox, you can alternatively use Chromium.

This assumes you are familiar with configuring NoTouch locally or via NoTouch Center and especially how server connections are created and configured. Making your endpoint start a Firefox web browser is easy and requires only two steps:

This is enough to get a Browser setup - it's really that easy. From there you can of course change many different options. For instance, you can configure the client to come up automatically after boot time; and you can modify all Firefox options (submenu Firefox web browser) under the Connection options. See below for the configuration possibilities.

Important note: In the default configuration, Firefox is not allowed to do a lot, it can not even access the sound/audio device. Please set the "Force execution as root" parameter to on in the Connection settings and read below about the implications.

By default, all writes done by the web browser, such as changing preferences inside Firefox, saving bookmarks, cookies, web cache etc. are all written to the local RAM disk. When closing Firefox and restarting later, all these modifications will be gone. A reboot will clear out even downloaded files. This makes NoTouch a great web kiosk system by default. This behavior can be modified as well as other aspects of the system.

Refer to the submenu "Firefox web browser", or simply "Browser" in NoTouch Center. Advanced aspects regarding the browser can be found there.

The "Start page" parameter can override the behavior and display a blank page, even if a startup URL is set. By default, a blank page will shown only when both the Startup URL and the Connection target are empty.

By default, Firefox will be run maximized - Maximized means that there is still the task bar visible as well as the window title bar. Other options would be "fullscreen" - without window title bar, without window borders, and covering all screen including the task bar with its start menu; or "X/Y size", meaning run in a window of size X pixels horizontally and Y pixels vertically. If you select "X/Y size", you should enter your desired Window height and width into the appropriate parameters. With the Window size "Maximized" or "Fullscreen", both options "Window width (X)" and "Window height (Y)" have no effect (of course).

There are parameters to specify the accepted languages - a comma-separated list in standard locale format, such as en or en_US for English or English/USA. The order matters! So for example if you would prefer to see Web pages in Italian, but speak English as well, you could enter it,en. French Canadians might want to enter fr_CA,en_CA,en_US to have French set as desired language with fallback English (Canada) and then English (US).

Furthermore you can block automatic loading of images, pop-up windows and Javascript.

Accessing the preferences from inside Firefox, via the Preferences menu entry, would allow a user to change preferences, at least for the current session (remember, writes are not persistent by default). The parameter "Lock preferences" will lock preferences that are set, i.e. the Firefox preferences dialog will not allow them to be modified.

The proxy settings here match the settings you would have when configuring Firefox via its native preferences dialog. If you set the proxy type to "System", this connection will inherit from the system-level proxy settings. Firefox proxy settings must be specified as host:port to have an effect, otherwise they will be ignored.

There are two submenus within the Firefox browser options that allow for even more advanced configuration, going beyond what is available in the NoTouch menu:

If using NoTouch Center, these options are text fields that are able to contain comma-separated lists.

Getting information about Firefox

As with normal Firefox, there are several special URLs that you can use to get information out of

Please note that our PDF viewer, xpdf, is not a plugin but a helper application - thus it won't be shown in the about:plugins dialog.

By default NoTouch does not store Firefox settings, cache, cookies, etc persistently. It is very easy though to modify that behavior, in fact there is even a procedure to let an administrator create a custom profile and then make it available to users, but disallowing users to store changes. This is only necessary if you want to make changes to your 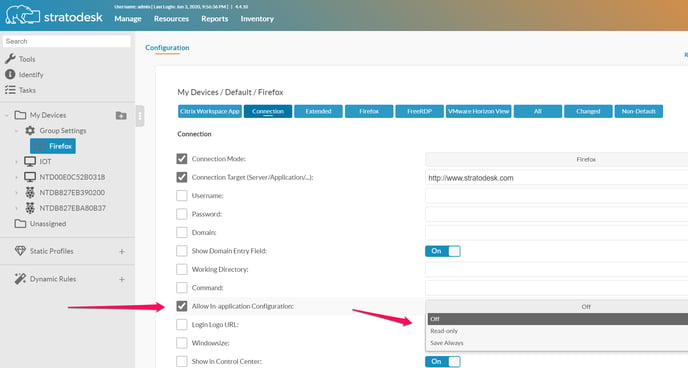 Note: Do not confuse this feature with the ability to modify templates. Templates are used to generate an application's configuration - the profile feature however takes already-generated configuration files, allows to modify them and stores them.

Make NoTouch save all user changes to Firefox

Disabling the NoTouch write protection is easy: Under the Connection options tab, there is the parameter "Allow in-application configuration". This parameter is set to "off" by default. If you set it to "Save always", NoTouch will store all changes made, such as bookmarks, history, cookies, cache persistently.

This setting is good for one or just a few trusted users. We do not recommend this for a public terminal. A more sophisticated approach is given right below:

You can use NTC's built-in Profiles feature to also distribute a Firefox profile. Please note that Firefox stores all its configuration inside of the "savecfg" folder of your config file, so if you just need to supply Firefox settings, it's enough if your profile contains just this one folder. Also, don't forget that you've got to create a browser connection named exactly like the one that was used to retrieve the config file from so that NoTouch Center is able to match the configuration to said connection!

Please note that values sent by the server in the connection ICA file will always override NoTouch settings. If you feel that something doesn't work, look on the server first!

Side note: Do not try to make the system use the Java ICA client - NoTouch has a native Citrix Receiver included that performs much better.

The Adobe Flash plugin is integrated and will work out-of-the-box.

NoTouch versions will always work with the latest available Flash plugin at the time of their release. That means that downloading a new, updated NoTouch OS image will also give you a new, updated Flash player plugin. However, Flash updates come irregularly and frequently, you may want to update the Flash player plugin on your own without actually updating the whole NoTouch OS image. From NoTouch OS 2.40.400 onwards you can update Flash on your own:

Troubleshooting: On the client, or via its web interface, open the Configuration, click on "Debug information" and then on "Cache". You will see error messages and status information there.

NoTouch supports Java; to be more precise: NoTouch typically includes a version of the Java Runtime Environment, capable of executing Java applications, Java WebStart and, relevant to this page about Mozilla Firefox, Java applets. Not all NoTouch images have Java included as it is big and not so widely used. If your system has Java, you will see it in the about:plugins list and Java applets will work out-of-the-box.

When clicking on a PDF file, NoTouch will launch xpdf, a free and fast PDF viewer.

With VDI connections, such as RDP, Citrix, VMware etc. almost no interaction happens between applications inside the user desktop and NoTouch. Running a local browser is different, it is indeed a local application executing code locally! Firefox allows your users to download Linux applications, configuration files, thus modifying the system, install malware, spyware, keyloggers. Yes, typical Windows malware like Win32 code will not work, so most standard attacks fail but you can not rely on that.

In a nutshell, we strongly suggest to put filtering proxy servers in place or otherwise confine Firefox to, say, a Citrix web portal, or similar. (see #URL-based_lockdown_scenarios)

NoTouch has several mechanisms in place to prevent permanent changes made by the user or a malicious software loaded by the user. These mechanisms are not unbreakable, but they provide reasonable protection against common attacks. There are two potential attack scenarios:

Both attacks could lead to keyloggers being installed (remember, there are no user documents to be stolen on the Thin Client, so the most valuable asset are probably user's keystrokes).

To mitigate the risks as much as possible, we suggest:

Note: Available on x86 (PC) only - not for the Raspberry Pi.

Troubleshooting: On the client, or via its web interface, open the Configuration, click on "Debug information" and then on "Cache". You will see error messages and status information there.

No Internet, just Intranet or connection broker only

If you want your users to be able to internal websites but not the free Internet at all, there is a simple trick that works without add-ons or proxy servers. This is useful for people who want to use the browser just for the Citrix web interface, and maybe a few other known-good internal URLs.

This method is so simple as effective. Your allowed URLs will work, and everything else will end at an error message.

Allow Internet, but no obscene or illegal material